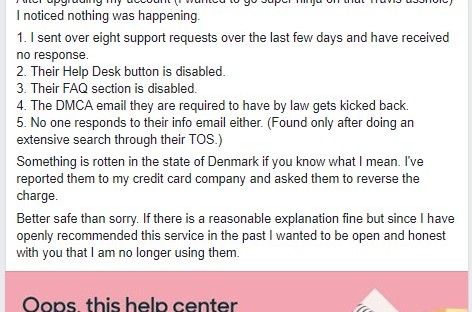 Since writing this blog post Blasty has come back online but as previously stated the help area and such is still disabled.

One of the things when you step into the world of publishing that fellow authors jump on and tell you to sign up quite early on in your book career to, is Blasty…. or formerly Blasty. It was a site that acted as a tool for fighting book piracy and I myself had been a paid member for almost two years.

I was a trusting member, so it comes as a huge shock to find this post circulating the book world today (it’s 2 weeks old but it has only started circulating to my end of the woods.)

Imagine my shock when I scrolled down the comments, wondering if this could be true and saw the update from only yesterday!! See the FB post here

Like a good little investigator I swung over to my Blasty dashboard and was met with the worst of my fears. An error message telling me that the address was no longer recognised. Unperturbed I swooped to my email, found a blast report from recently and clicked the ‘see blasts’ button, hoping it was just a google chrome error.

Much to my dismay, rumour is now circulating that their own CEO up and left it months ago and all the reports and so called blasts we have been notified of ever since are fake reports.

I cannot confirm whether that is true or not but I advise anyone who was a paid member to contact your bank and recall recent payments and block future ones. Having no access to the dashboard means we cannot do it ourselves. I have already contacted my bank and actioned this and I urge you to not rely on an auto cancel with the website disappearing.

I am gutted about the way this website has bowed out and not even played fair by it’s loyal paid members. They could have informed us they were dissolving and ceased all memberships.

I was reading more and more lately that Blasty was not as efficient as they claimed to be and found several blogs outing them for masking the piracy issue rather than removing books. I do wonder if these wave of blogs were what ended their reign.

I only know what my experience has been and even though I had the auto blast function I did tend to send my own emails to pirate sites for take downs and have found my books removed from several places. I cannot say if the blasted ones were removed as there has been implications that Blasty only had the links themselves removed from google and not the actual books. I cannot confirm this but you can search blogs on this topic all over google from much more experienced users.

Only time will tell I guess.

In the meantime I guess we have to go back to emailing, fighting piracy on our own again and manually searching for our books. I will miss it’s ability to find even the vaguest links for me to act upon.

If anyone has any alternate websites then let us know and we will add to this post.